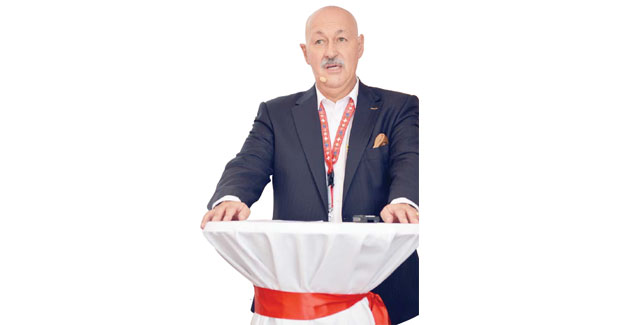 SWISSMEM, the Swiss textile machinery industry association, celebrated its platinum jubilee just two months before ITMA 2015, which gave an opportunity for the industry to ponder over critical issues including the future of textile technologies.

SWISSMEM, the Swiss textile machinery industry association, celebrated its platinum jubilee just two months before ITMA 2015, which gave an opportunity for the industry to ponder over critical issues including the future of textile technologies.

Swiss textile machinery industry has come a long way since the association representing it, SWISSMEM, was established 75 years ago. A grand dinner, held recently at Bad Ragaz, was attended by over 150 eminent people from the industry, which also included textile journalists from all over the world. Ernesto Mauro, President and Cornelia Buchwalder, Secretary General were at their best when they spoke about the Swiss machineryÂ´s role in spearheading a revolution in the textile industry since its inception. There were three sessions of presentations from top Swiss companies.

Said Mauro in his introductory speech: Â¨About six months ago I was pessimistic looking at the trends unfolding. Troubles everywhere and markets were down and some companies were on the verge of downing shutters. But today, things are far better. Many of the Swiss textile machinery manufacturers today can convincingly say that the condition has improved and have good things to say about 2015. The worst in the cycle of textile industry seems to be over.Â¨

Â¨SWISSMEM began its journey 75 years ago. Competition for the Swiss textile machinery industry came much after that from other countries including China, but still the industry has weathered all the storms and has survived successfully. Swiss industry is a legacy which will continue its excellence in technologies in the years to come,Â¨ Mauro said.

Said Mauro: Â¨Today, we not only celebrate 75 successful years. We celebrate also a firm foundation from which we are able to look forward with confidence in a successful future. Over the coming decades, the secret of our success will continue to lie in the key factors of innovation, flexibility and perseverance. These are the typical entrepreneurial traits of our founding enterprises.

There is no nobler thing than to foster these values, and to take on the next 75 years with our heads held high!Â¨ There were an array of presentations from some top Swiss textile machinery companies (of which this correspondent writes at a later part). The denouement was a panel discussion on September 20, 2015 with the Swiss moderator Reto Lipp from Swiss TV and the following participants: Ernesto Maurer, President of the Swiss Textile Machinery Association and CEO of SSM, SchÃ¤rer Schweiter Mettler AG; Sonja Amport, Head of Swiss Textile Technical College; Martin Folini, CEO of Saurer AG; and Stephan Friedrich von den Eichen, Executive Partner at IMP Consulting AG, the Innovative Management Partner company. Mauro was at his inimitable best. He added the spark to the debate whether innovation was at standstill and that companies have become Â¨frogs in a drying pondÂ¨. More thought-provoking remarks were made about teaching and training in textile machinery industry, and Mauro made the clarion call to make the industry Â¨more sexyÂ¨ to attract talents to improve technology for the future.

Â¨Globalisation will continue, as the introduction of free markets is discussed in many regions of the world. China will continue to be extremely important – not only as a market for textile machines, but also as a machine manufacturer and a competitor for the Swiss textile machinery industry. Technical developments in textile machinery will continue to focus on quality, productivity, efficiency, and energy savings. But today, we can talk about a fourth industrial revolution (Industry 4.0). Here the virtual and physical worlds interact and form so called cyber physical systems. Information and data become crucial resources within the whole production process. Communication between machines (the internet of things) will be of even greater impo