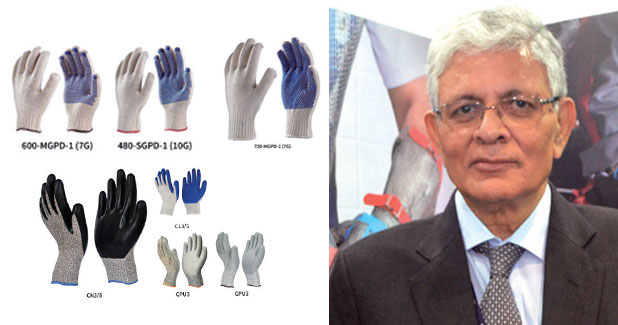 Marvel Group is therefore creating awareness among Indian workers and industries for the selection of right type of safety gloves as per their applications to avoid injuries and accidents and to work efficiently, safely and without restriction of movement.

Marvel Group is creating awareness among Indian workers and industries for use of safety gloves.

Here are risks associated with every workplace, in varying degrees. In some industries, the outcome of a typical incident may be relatively low like a worker slipping on a wet floor; while in other industries a typical incident can have far more severe consequences, such as a building worker hurt in a fall, or a factory worker caught up in machinery or trapped in some equipment. But at the very basic level, it is the hands that need protection and thatâ€™s where gloves fit in neatly.


Marvel Gloves Industries, founded in 1980 by Farooq Abdullah, Managing Partner, established its first seamless knitted gloves manufacturing unit at Ankleshwer in Gujarat. That was the time when providing gloves to shopfloor personnel was something unheard of, thanks to lack of awareness in general, but also
for the simple reason of keeping costs down to minimum. In the initial days the venture was not a success but gradually the promoterâ€™s dedication, team efforts, customer support, and above all quality products created high confidence in the buyers.
Marvel Group has since won two National Awards for Quality Products, which were presented by the Presidents of India that won the company recognition and fame in the safety gloves market in India and abroad. Today the companyâ€™s infrastructure is strong enough to handle the increasing demand from domestic and international markets.
The company
is customer friendly and guides customers in selecting the right gloves for
right application.
Marvel Group is therefore creating awareness among Indian workers and industries for the selection of right type of safety gloves as per their applications to avoid injuries and accidents and to work efficiently, safely
and without restriction of movement. The company strongly recommends selecting the right glove for particular task for optimisation of work safety, maximisation of productivity and minimisation of workplace accidents.
India is the worldâ€™s second largest country in terms of population and has millions of workers. The demand and use for safety gloves and personal protective equipment is increasing day by day. Considering this rising demand, Marvel is regularly importing a wide range of gloves and personal protective equipment from other countries to meet the growing demand from customers. The company ensures that the products sourced from such suppliers are of high quality and
suitable for use in Indian conditions.
Marvel Group is an exclusive agent for India of Rubberex â€“ Malaysia, which is a globally acclaimed industrial and household nitrile and rubber gloves manufacturer. The group is rightly proud of its association with the Malaysian company since 1985. Besides, it is also
an Indian agent for the entire range of industrial gloves from some other
global manufacturers.
CATEGORIES Home Textiles
TAGS Farooq AbdullahglovesMarvel GroupNitrile and Rubber GlovesRubberex
Share This