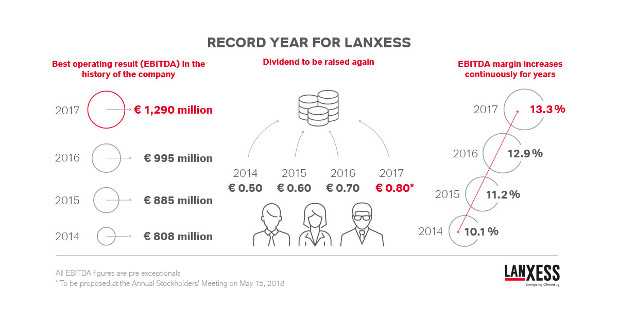 The main drivers of the strong rise in earnings were higher volumes in all segments as well as the strong contribution of the Chemtura businesses acquired in the previous year. The EBITDA margin pre exceptionals increased from 12.9 per cent to 13.3 per cent, moving another step closer to the mid-term margin target. From 2021, the average margin is expected to be between 14 per cent and 18 per cent. Group revenue also rose substantially by 25.5 per cent to EUR 9.66 billion in the last fiscal year compared with EUR 7.7 billion the year before.

The reported key financial ratios are in line with current market expectations.

â€œWe achieved a lot strategically and operationally in the last fiscal year, laying firm foundations for the future,â€ said Matthias Zachert, Chairman of the LANXESS Board of Management. â€œWith Chemtura, we successfully completed our biggest acquisition to date, and also significantly improved the quality of our portfolio even more. In this set-up, we achieved the best earnings in LANXESSâ€™s history so far while further enhancing the Groupâ€™s profitability.â€

Along with its acquisitions, LANXESS also accelerated its organic growth in 2017. The Group invested around EUR 550 million in its global plant network, including around EUR 235 million in the German sites. It also made progress with its aim of achieving a greater regional balance of its business in 2017. LANXESS continued to expand its presence and its sales in the growth regions of North America and Asia. North America increased its share of global sales from 17 percent to 19 percent, while that of Asia-Pacific rose from 26 percent to 28 percent. This means that the Group now generates almost half its sales in these two market regions.

Sales of the Advanced Intermediates segment came to EUR 1.97 billion in fiscal year 2017, 13.1 per cent above the prior-year figure of EUR 1.74 billion. EBITDA pre exceptionals increased by 2.8 per cent to EUR 335 million compared with EUR 326 million a year earlier. A solid rise in volumes for intermediates generated this positive performance, offset by weak demand in the agricultural sector and adverse currency effects. The EBITDA margin pre exceptionals was 17.0 per cent, against 18.7 per cent in the previous year.