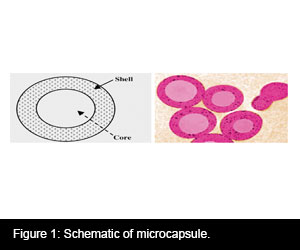 Microencapsulation & its application in finishing

Microencapsulation is being used to make climate-control materials, incorporate fragrances into clothing, and to add cosmetic, therapeutic and medical properties or desired functionality to fabrics, explain Deshpande RH, Tarade Mayur and Chinchwade SS.

Microencapsulation is being used to make climate-control materials, incorporate fragrances into clothing, and to add cosmetic, therapeutic and medical properties or desired functionality to fabrics, explain Deshpande RH, Tarade Mayur and Chinchwade SS.

Microencapsulation is a process in which tiny particles or droplets are surrounded by a coating to give small capsules with many useful properties. The material inside the microcapsule is referred to as the core, internal phase or fill, whereas the wall is sometimes called a shell, coating or membrane. Most microcapsules have diametres of a few micrometres. In some cases, the core must be separated from its surroundings, as in isolating vitamins from the deteriorating effects of oxygen, retarding evaporation of a volatile core, improving the handling properties of a sticky material, or isolating a reactive core from chemical attack. In other cases, the objective is not to separate the core completely but to control the rate at which it leaves the microcapsules as in the controlled release of drugs or pesticides. Manufacturing costs are based on coating material, solvent and type of equipment used.

Microencapsulation is the process by which individual particles or droplets of solid or liquid material (the core) are surrounded or coated with a continuous film of polymeric material (the shell) to produce capsules in the micrometre to millimetre range, known as microcapsules.

The resultant product of the microencapsulation process is termed as microcapsule. Such capsules are of micrometre size and have a spherical or irregular shape. Microcapsules can be divided into two parts, namely the core and the shell. The core (intrinsic part) contains the active ingredient, while the shell (the extrinsic part) protects the core permanently or temporarily from the external atmosphere. The commonly used shell materials are proteins, polysaccharides, starches, waxes, fats, natural and synthetic polymers and resins.

There are four typical mechanisms by which the core material is released from a microcapsule. Less common release mechanisms include ablation (slow erosion of the shell) and bio-degradation. The different mechanisms are as<