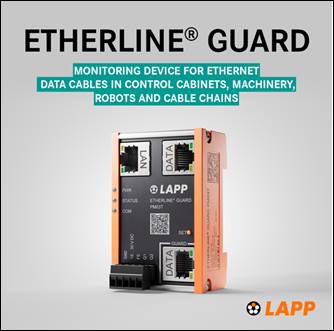 It is a stationary monitoring device that continuously monitors an Ethernet cable, detects a decline in performance and displays it with the cable status

LAPP has announced the launch of ETHERLINE® GUARD in key markets globally, including India. Etherline Guard is a stationary monitoring device that continuously monitors an Ethernet cable, detects a decline in performance and displays it with the cable status.This is the latest addition to LAPP’s extensive industrial communication portfolio.

Using the power of preventive maintenance, this device helps increase plant availability through planned machine downtimes, thereby reducing maintenance costs. Etherline Guard allows for easy commissioning with automated parameterisation and does not require a new data cable or changes to the cable design. This enables upgrading within the existing network structure possible at any time. This device is slightly smaller than a standard deck of cards (49 mm wide, 76.5 mm high and 36 mm deep). It is operated with 24 V DC and is intended for a temperature range of -40°C to +75°C. The device is resistant to vibrations and shock in accordance with DIN EN 60529. It can be installed at the end of the communication cable which is part of a drag chain or robotic arm. The Etherline Guard is suitable for mounting on top-hat rails and can be used for control cabinets owing to its protection class IP 20.Its unique and compact design saves space and offersreliable cloud communication, owing to the MQTT interface (for status/data evaluation, settings, WiFi configuration, updating, etc.). The product is currently available in two variants: cable-bound LAN version “PM03T” and wireless Wi-Fi version “PM02TWA”.

Commenting on the launch, Gary Bateman, Managing Director, LAPP India said, “The launch of Etherline Guard Is our latest initiative in developing products that cater to specific industry challenges. This compact and easy-to-install device will prove to be instrumental in preventing potential system failuresdue to cable wear and tear and unplanned downtimes, thereby increasing the availability and performance of the system.”

This device is particularly useful for data cables that are exposed to constant mechanical stress, including movement at high speed and acceleration, changing motion sequences, rotations with very high axial angles of rotation, short cycle times and small bending radii. The device can also be used in critical processes, where a downtime would result in high costs or lost productivity. In terms of applications, Etherline Guard can be used in Ethernet-based networks for automation technology, monitoring the service life of a data cable and predicting potential failure.