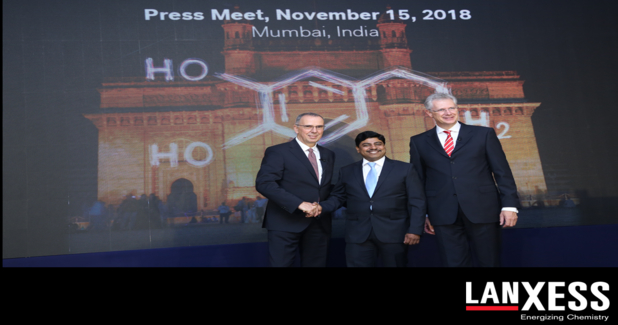 LANXESS to beef up Indian operations

Buoyed by the doubling of its sales in India and witnessing speedy growths in potential areas including mobility, agriculture and construction industry, Lanxess is raring to beef up its asset base in India.

Buoyed by the doubling of its sales in India and witnessing speedy growths in potential areas including mobility, agriculture and construction industry, Lanxess, a leader in speciality chemicals is raring to beef up its asset base in the country. Lanxess has lined up an investment of Rs 1250 crore till 2023, with the foucs areas of chemical intermediates, high-performance plastics and water treatment products. Supported by a sizeable investment already pumped into India over the years, the company currently is concentrated on production facilities for five business units at its sites in Jhagadia in the Bharuch district of Gujarat and Nagda in the Malwa region of western Madhya Pradesh.

Neelanjan Banerjee, Vice Chairman & Managing Director of Lanxess India Pvt Ltd said that since the company has been incorporated into India in 2004, it has steadily grown its business in terms of asset base and turnover. In the last ten years, sales in India have more than doubled from Rs 1008 crore to Rs 2608 crore. The year 2018 has also been a good year so far for LANXESS India. Turnover increased by 14 per cent in the first nine months compared to the same period last year.

In India, LANXESS is represented through all its ten business units, operating out of its registered office in Thane and sales offices in New Delhi and Chennai with around 900 employees across its operations, said Banerjee. He added that LANXESS operates production facilities for its business units Liquid Purification Technologies (ion exchange resins), High Performance Materials (high-performance plastics), Material Protection Products (biocides) and Rhein Chemie (polymer bound rubber chemicals and release agents) in Jhagadia. The business unit Advanced Industrial Intermediates has production facilities both in Jhagadia and Nagda.

The main growth driver for LANXESS in India is the changing population which is rapidly becoming larger, younger, more middle class and more urban. â€œThe demographic trend in India is leading to an increased demand in the areas of mobility, urbanization, nutrition and clean water. LANXESS can cater these demands with its wide portfolio of specialty chemicals,â€ said Banerjee.

â€œThe Indian economy is currently the worldâ€™s fastest rising major economy, with the chemical industry as one of the fastest growing sectors. We aim to even better capitalize the huge potential of the Indian chemical market and are therefore now launching a major investment package,â€ said Dr Hubert Fink, Member of the Board of Management of LANXESS AG.

According to Dr Rainier van Roessel, LANXESS AG Board of Management, Lanxess wants to concentrate on four focus areas, among which the main is the high-margin speciality chemicals. Secondly, mid-sized markets are the in-thing today, and with this, Lanxess will pull all resources to expand integrated value chain in this area. Lastly, the growth plans will be targeted at the two big markets — North America and India.

Dr Fink was all praise for the transformation of India into the third largest economy in the world. â€œThis fastest rising economy will become the second largest economy by 2050, and speciality chemicals are expected to play a major role in the countryâ€™s development,â€ said Dr Fink.