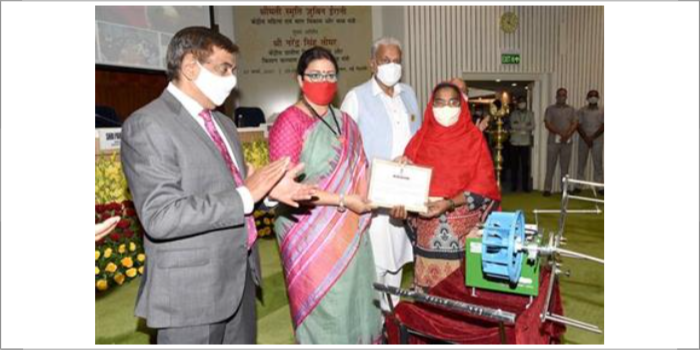 India to be Atmanirbhar in silk production in 2 years

The Central Silk Board under the Ministry of Textiles and the Ministry of Agriculture and Farmers Welfare signed a Memorandum of Understanding on a convergence model for implementation of agro-forestry in the silk sector.

The Central Silk Board (CSB) under
the Ministry of Textiles and the Ministry of Agriculture and Farmers Welfare
signed a Memorandum of Understanding (MoU) on a convergence model for
implementation of agro-forestry in the silk sector under the ongoing Sub-Mission
on Agroforestry (SMAF) scheme, in the presence of union textiles and women and
child development minister, Smriti Zubin Irani and minister of state for
agriculture and farmers welfare, Parshottam Rupala on 7, March,
2021. The MoU was signed by Alka Bhargava, additional secretary, DAC&FW and
Rajit Ranjan Okhandiar, member secretary (Central Silk Board), Ministry of
Textiles.  The signing of this MoU aims
to incentivise the farmers to take up sericulture based agroforestry models
thereby contributing to Make in India and Make for the World vision of Prime
Minister Narendra Modi. This linkage will add another dimension to agroforestry
for faster returns to the growers as well as support the production of the
range of silks that India is famous for. The Central Silk Board (CSB), Ministry
of Textiles, government of India will act as a catalyst to promote agroforestry
in the silk sector. The Buniyaad Reeling Machine for Tussar silk yarn were also
distributed to some of the beneficiaries on the occasion. The beneficiaries
also shared their experiences virtually from across the country.

Speaking on the occasion, Smriti
Zubin Irani said that India will be fully Atmanirbhar in silk production in the
next two years. She said that raw silk production in the country has increased
35 per cent in the last six years. The minister informed that more than 90 lakh
people have got employment in raw silk production.  Addressing
the â€˜National level programme on convergence of Agro-Sericulture and
eradication of Thigh reelingâ€™ where the MOU was signed, Irani informed that
8000 women thigh reelers were identified for providing Buniyaad machines and
5000 women have already been supported under Silk Samagra Phase I. She said
that for remaining 3000 thigh reelers, fund provision has been made in order to
eradicate unhygienic and obsolete thigh reeling practice from the country.

The minister further stated that this
MOU signing will increase the agricultural income from 20 to 30 per cent.
Referring to the PPE kits, in which India has become the second largest
producer in the world, she said that India has the capability of creating
history in agro-technical textiles also. She said farmerâ€™s income has almost
increased to 60 per cent by adopting agro technical textile. She said that
consumption of agriculture based technical textile will increase by involving
Krishi Vigyan Kendra in creating awareness about agro-tech and technical
textiles. She said this will lead the way for creation of new products.

Speaking on the occasion, Parshottam
Rupala  said that the MOU signing will
not only increase the income and production
of farmers but will also remove
the difficulties faced by them. He suggested to link the farmers dealing
in silk production with Farmers Produce Organisations (FPO)for increasing their
earnings.

U.P. Singh, Secretary, Ministry of
Textiles in his address said that these MOUs will increase the quality as well
as the production capacity of silk in the country.

The Department of Agriculture,
Cooperation and Farmers Welfare (DAC & FW) is implementing the Sub-Mission
on Agroforestry (SMAF) since 2016-17 as part of the recommendation of the
National Agroforestry Policy 2014. India was the first country to have such a
comprehensive policy which was launched at the World Agroforestry Congress held
in Delhi in February 2014. At present, the scheme is being implemented in 20
States and 2 UTs.

SMAF aims to encourage farmers to
plant multi-purpose trees together with the agriculture crops for climate
resilience and additional source of income to the farmers, as well as enhanced
feedstock to inter alia wood based and herbal industry. Hence there is a
concerted effort to include medicinal, fruits, fodder, tree borne oil seeds,
lac host etc in addition to the longer rotation timber species. The initiative
of formalizing the collaboration in the sericulture sector is especially
targeted for augmentation of sericulture host plants e.g. Mulberry, Asan,
Arjuna, Som, Soalu, Kesseru, BadaKesseru, Phanat, etc. to be cultivated both as
block plantations and border or peripheral plantations on farm lands. Planting
sericulture based tree species on farm bunds and rearing silkworms has the
potential of creating additional income opportunities to farmers besides their
regular source of income from agriculture activities.