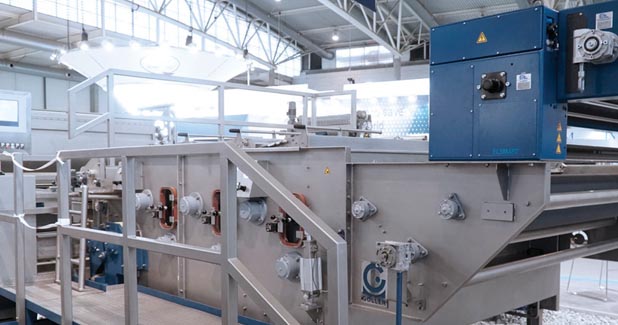 adminSeptember 1, 2019 12:00 am 0
Better lustre, lesser shrinkage and reduced dyestuff consumption are some of the benefits of Gollerâ€™s latest knit mercerizing range, KNIT MERC.


During ITMA 2019 Barcelona, Goller showed its latest model of knit mercerizing range, which is â€œKNIT MERCâ€ together with the new generation of washing unit – Sintensa Cyclone Tandem, which is designed for generating high washing efficiency with minimal tension incurred. Goller knit mercerizing range has been commonly applied for enhancing the values of cellulosic fibre-made fabrics. By putting fabrics on Goller knit mercerizing range for mercerizing, the fabrics will be firstly immersed in caustic soda in high concentration, then followed by certain extent of tension ap-plied. Mercerizing not only improves the dyeability but also the dimensional stability of fabrics. After the fabrics being mercerized, the lustre gained is ever-lasting whereas a smoother hand-feel can be expected, which ends up bringing the overall quality of fabrics to the stand-out-from-the-crowd level.
The very first set of Gollerâ€™s Knit Merc has been sold to a customer who produces high-end knit fabrics in Portugal. With the demand of comfortable clothing growing year by year, it is expected that the application of mercerizied knit fabrics on garments will also increase accordingly.
The key features and advantages of Goller â€œKNIT MERCâ€ are:
By considering all the features and advantages of Goller KNIT MERC, it is not unrealistic to con-clude that this range will become a popular choice in the market of open width knit fabrics pro-cessing in the near future.