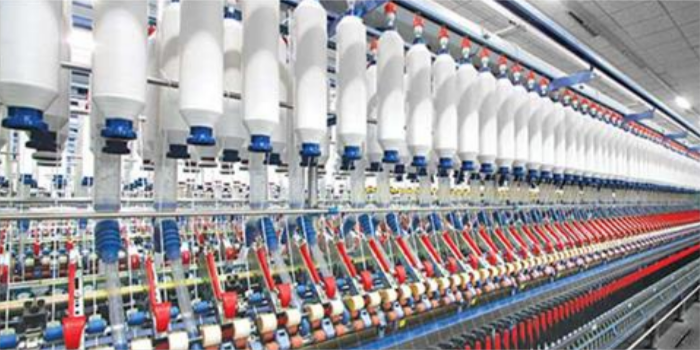 Deliveries of new short-staple spindles, open-end rotors, and long-staple spindles dropped by -48%, -27%, and -46%, respectively, says ITMF report. However, shipments of large circular knitting machines marked the exception with a 13% growth.

In 2020, global shipments of spinning, texturing, weaving, knitting, and finishing machines decreased on average compared to 2019, according to the 43rd annual International Textile Machinery Shipment Statistics (ITMSS) recently released by the International Textile Manufacturers Federation (ITMF). Deliveries of new short-staple spindles, open-end rotors, and long-staple spindles dropped by -48%, -27%, and -46%, respectively. The number of shipped draw-texturing spindles declined by -30% and deliveries of shuttle-less looms shrunk by -16%. Shipments of flat knitting machines contracted by -53%, while shipped large circular machines marked the exception with a 13% growth. The sum of all deliveries in the finishing segment also dropped by -17% on average.

The ITMSS report covers six segments of textile machinery, namely spinning, draw-texturing, weaving, large circular knitting, flat knitting and finishing. A summary of the findings for each category is presented below. The 2020 survey has been compiled in cooperation with more than 200 textile machinery manufacturers representing a comprehensive measure of world production.

Spinning machinery
The total number of shipped short-staple spindles decreased by about 3.3 million units in 2020 to a level of 3.63 million. Most of the new short-staple spindles (88%) were shipped to Asia & Oceania, where delivery decreased by -50%. While levels stayed relatively small, Europe saw shipments increasing by +76% (mainly in Turkey). The six largest investors in the short-staple segment were China, India, Turkey, Pakistan, Bangladesh, and Uzbekistan.

In 2020, 422 thousand open-end rotors were shipped worldwide. This represents 151 thousand units less compared to 2019. 83% of global shipments went to Asia & Oceania where deliveries decreased by -32% to 351 thousand rotors. Turkey, and Pakistan were the worldâ€™s 2nd and 3rd largest investors in open-end rotors after China and saw investments surging by +290% and +42%, respectively. China, India, Uzbekistan, and Brazil, the worldâ€™s 1st, and 4th to 6th largest investors in 2020 decreased investment by -30% on average.

Global shipments of long-staple (wool) spindles decreased from about 40 thousand in 2019 to nearly 22 thousand in 2020 (-46%). This effect was mainly driven by a fall in deliveries to Asia & Oceania with a decrease in investment of -75%. 80% of total deliveries were shipped to Iran, Turkey, and Italy.

Texturing machinery
Global shipments of single heater draw-texturing spindles (mainly used for polyamide filaments) decreased by -36% from nearly 26â€™000 units in 2019 to 16â€™000 in 2020. With a share of 89%, Asia & Oceania was the strongest destination for single heater draw-texturing spindles. China, Japan, and Chinese Taipei were the main investors in this segment with a share of 63%, 9%, and 8% of global deliveries, respectively.

In the category of double heater draw-texturing spindles (mainly used for polyester filaments) global shipments decreased by -30% to a level of 325 thousand spindles. Asiaâ€™s share of worldwide shipments remained stable at 90%. Thereby, China remained the largest investor accounting for 78% of global shipments.

Weaving machinery
In 2020, worldwide shipments of shuttle-less looms decreased by -16% to 112 thousand units. Shipments in the categories â€œair-jetâ€ and â€œrapier and projectileâ€ fell by -3% to 29,337 units and -15% to 21,542, respectively. The deliveries of water-jet looms decreased by -21% to 61,483. The main destination for shuttle-less looms in 2020 was Asia & Oceania with 94% of all worldwide deliveries. 98%, 93%, 81% of global water-jet, air-jet, and rapier/projectile looms were shipped to that region. The main investor was China in all three sub-categories. Deliveries of weaving machines to this country cover 74% of total deliveries.

Circular & flat knitting machinery
Global shipments of large circular knitting machines grew by +12% to 30,231 units in 2020. The region Asia & Oceania was the worldâ€™s leading investor in this category with 81% of worldwide shipments. With 62% of all deliveries (i.e.15,980 units), China was the favoured destination. India and Turkey ranked second and third with 2,433 and 2,381 units, respectively.

In 2020, the segment of electronic flat knitting machines decreased by -52% to around 66 thousand machines. Asia & Oceania was the main destination for these machines with a share of 77% of world shipments. China remained the worldâ€™s largest investor with an 38% share of total shipments despite a -74% decrease in investments. Shipments to China dropped from about 69 thousand units in 2019 to 17 thousand units in 2020.

Finishing machinery
In the â€œfabrics continuousâ€ segment, shipments of Sanforizers / Compacters grew by +75%. All other subsegment either remained stable or shrunk. Since 2019, ITMF estimates the number of shipped stenters non-reported by the survey participants to inform on the global market size for that category. The market for stenters is expected to have been stable since 2019 and thus deliveries must have reached 1,731 units in 2020.

In the â€œfabrics discontinuousâ€ segment, the number of jigger dyeing / beam dyeing shipped dropped by +8.5% to 529 units. Deliveries in the categories â€œAir Jet Dyeingâ€ and â€œOverflow Dyeingâ€ respectively decreased by -18% and -21% in 2020.