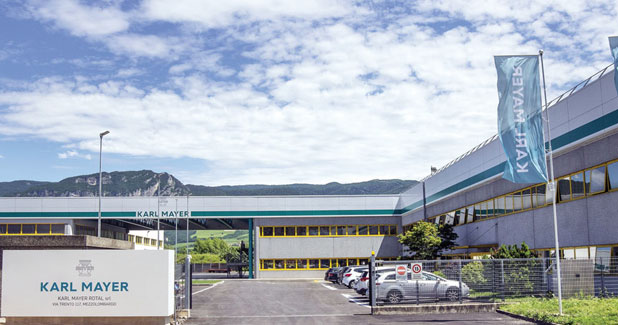 KARL MAYER ROTAL received positive feedback following its open house event to mark the extension of its plant. Since it began operating as a local supplier of machines at the end of the 1960s, KARL MAYER ROTAL has become a global producer of high-tech warp preparation machines, and is set on course for further expansion.

Since it began operating as a local supplier of machines at the end of the 1960s, KARL MAYER ROTAL has become a global producer of high-tech warp preparation machines, and is set on course for further expansion. At the beginning of this year, the production facilities at the companyâ€™s headquarters in Mezzolombardo were extended by 3,100 m2, and the companyâ€™s site now covers an area of 9,000 mÂ². Turnover has been quadrupled over the past five years.

The turnover of this company has since increased to Euro 40 million. The 45 million-euro-level is likely to be passed in 2016 and this is generated mainly by exports. KARL MAYER ROTAL achieves roughly 80 per cent of its profits overseas, mainly in India, Pakistan, Bangladesh and Turkey, but business has also started to pick up on the domestic market again. The revenue is generated by selling sizing and dyeing machines for the denim sector and with sales activities for the whole KARL MAYER Group.

In the recent expansion, which was completed in June of this year, â‚¬2.7 million were invested.

The project was the reason why KARL MAYER ROTAL decided to invite its customers to an open house event at its modern site. The event held recently was the perfect opportunity for the visitors to view the production facilities, to look at the latest technology in sectional warping, indigo dyeing and sizing, and to exchange information â€“ an invitation that a large number of Italian manufacturers accepted.

A total of 146 representatives from 50 companies attended the open house event for the warp preparation customers in Mezzolombardo, and their interest in the company and machines on show generated positive feedback for the organisers. â€œWe are really delighted with the event,â€ said the Sales Director, Guiseppe Moretti. â€œThe open house event was extremely popular and sent out a clear message to the market. It showed Italian manufacturers, who have always been some of the most important customers for the textile industry, how seriously the KARL MAYER Group takes their requirements.â€

And the guests were also very satisfied with their visit. Many of them did not even know that KARL MAYER operates on such a modern and important site in Italy. Many customers were also able to pick up new suggestions and ideas for developing and expanding their businesses.Investing in expanding the plant has strengthened the companyâ€™s position on its international markets and has also increased awareness of Italy as a production location. â€œWith this investment, the KARL MAYER Group has confirmed its long-term commitment to the growth of KARL MAYER ROTALâ€, said Enzo Paoli, the current Managing Director. The reason for the sustainable success of the company is its focus on research and innovation, its highly qualified workforce â€“ a total of about 80 people are currently employed in the company â€“ and its state-of-the-art production facilities. These enable the high, company-specific quality objectives to be met, and this is an important argument in favour of buying its products. â€œWe are operating on a highly competitive market,â€ explained the managing director. â€œQuality is the key to success here, especially in new business segments.â€

Walking on water â€“ with the right technology

Making the seemingly impossible, possible, needs visionaries like Christo, the â€œwrappingâ€ artist, and technical specialists like Setex-Textil GmbH. Working in conjunction with other experts, these two specialists in art paved the way for a new impressive art installation that was designed to last for sixteen days. With their Floating Piers Project, they anchored a floating bridge at least 3 km long and 16 m wide on Lake Iseo in Lombardy, Italy. This temporary installation linked the two islands of Monte Isola and San Paola with the town of Sulzano on the mainland, and invited the public to come and walk on water. The clever construction was made from a total of 2,00,000 floating plastic cubes to create the perfect experience of walking on water. The cubes were joined together to produce 100-m-long segments, and the sections were anchored to the bottom of the lake by concrete blocks weighing 5.5 t. The floating construction was then covered with fabric to give the functional work of art real visual impact. The textile covered the deep blue surface of the lake like a dahlia-yellow-coloured ribbon, which changed colour depending on how the light impinged on it. To produce the fabric required, Christo worked with a long-term partner, Setex-Textil GmbH. This textile company, which is based in MÃ¼nsterland, manufactured the 100,000 m2 of fabric for the Floating Piers from polyamide 6.6, and produced the warp beams for the fabric on a KARL MAYER sectional warping machine.

With its attractive shape and clean lines, the one-piece bra, which looks as if it has been produced in a mould, is marching triumphantly through the Chinese lingerie business. This popular lingerie item owes its success to its special design. It is produced with virtually no seams, is practically invisible and comfortable under clothing, and has no friction points whatsoever. The bra also has an impressive, soft, cool feel, which is the result of the fabric from which it is made â€“ a charmeuse fabric produced on a KARL MAYER HKS 2-SE machine.

With all the hype surrounding this fashionable, seamless bra, the demand for this innovative, high-speed tricot machine is also increasing. â€œThe machine was premiered at ITMA 2015 in Milan, and has been selling well ever since. Over the last six months, however, we have seen a big increase in demand in China,â€ says KARL Mayerâ€™s Sales Manager, Rainer Mueller. According to this Hong-Kong-based sales and marketing expert, the main sales region is Guangdong Province â€“ an area where there is a high concentration of manufacturers of stretch textiles. These warp knitting companies mainly supply and sell to the local and domestic brands that are already established on the Chinese market, such as Xiang Da Da, Lin Xi Meng, Xing Fu Hu Li, Jin Wie and Qing Qing Ku. They are able to profit from easy online marketing and sales platforms like WeChat and webshops, but benefit especially from highly efficient production technology.

Efficient production in just a few steps: The HKS 2-SE operates in a machine gauge of E 36 to produce the lingerie fabric for the one-piece bra. This high-speed tricot machine specialises in producing stretch knit goods, and operates at an impressive level of efficiency to produce high-quality fabrics. The Low Energy Option (LEO) means that the HKS 2-SE also offers advantages in terms of operating costs and environmental protection. Specific changes to the machine design have enabled energy consumption to be reduced by as much as 13 per cent.

The smooth, high-quality fabric, which is produced at a high level of efficiency, can be processed into a complete bra in just a few stages. The entire bra with its cups and side wings is styled in a single piece, and combined with a single layer or several layers. The assembly is laminated and the straps and fastening are added â€“ and thatâ€™s it! The result is a comfortable bra that is easy to manufacture.