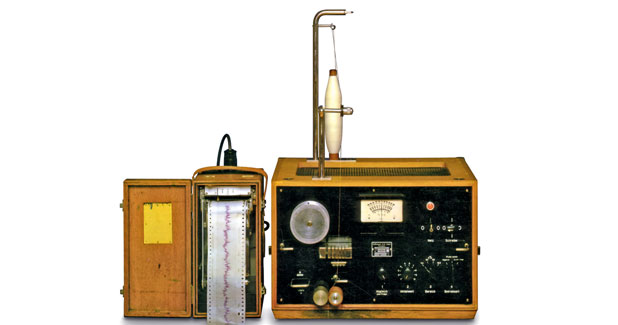 Evolution of a unique invention for quality

One of the pioneers of USTER STATISTICS tells the story of its origins and development. This year USTER STATISTICS celebrates its 60th anniversary â€“ so it is fitting to review the origins of this world-renowned textile benchmarking tool. And what better way than to hear the story first hand from someone who was closely involved right from the start? Peter HÃ¤ttenschwiler, who devoted his entire working life to USTER, reveals the facts behind the remarkable success of a concept which was never actually intended to become quite so â€˜famousâ€™.

One of the pioneers of USTER STATISTICS tells the story of its origins and development.

This year USTER STATISTICS celebrates its 60th anniversary â€“ so it is fitting to review the origins of this world-renowned textile benchmarking tool. And what better way than to hear the story first hand from someone who was closely involved right from the start? Peter HÃ¤ttenschwiler, who devoted his entire working life to USTER, reveals the facts behind the remarkable success of a concept which was never actually intended to become quite so â€˜famousâ€™.

Peter HÃ¤ttenschwiler celebrated his 90th birthday on September 26. He was born in St. Gallen (Switzerland), a city dubbed the â€˜lace capitalâ€™. Demand for lace and embroidery fluctuated during the 20th Century, but the industry was badly hit by the after-effects of the First World War and then by global economic crisis of the late 1920s. Fashion trends were also turning away from the decorative look at this time. HÃ¤ttenschwilerâ€™s father was among many who lost their jobs in the downturn, and the family moved to Wald, in the Zurich highlands, where companies in other textile sectors were still prospering.

Even so, university was still not an option for HÃ¤ttenschwiler. Instead, he started work as an apprentice in the precision engineering department of Zellweger Uster, a well-established and sizeable company which had a good reputation as a breeding ground for mechanics. Located in the nearby city of Uster, the company was then producing a range of textile machines for domestic and export markets. World War Two saw the collapse of the export business, and Zellweger Uster began to diversify into other product areas, including coffee refiners, electric cheese grinders and radio equipment.

The step forward into new technology in the emerging field of electronics was a logical advance from the radio expertise, boosted by the availability of a new generation of well-educated engineers as businesses shifted their focus from wartime defense-oriented activities. Zellweger took advantage of the trend by growing as a technology enterprise, with an extensive portfolio of product inventions and patents.

One such innovation began when Hans Locherâ€”a young radio operator officer and engineer with experience in wireless signalingâ€”was inspired by the idea of developing a machine to measure yarn evenness. Peter HÃ¤ttenschwiler was his assistant at Zellweger.

Local spinners provided the impetus, with their request to have measurable data on the evenness of their yarns â€“ and on those of their competitors. They saw this as an aid to accurate pricing, improved quality and forecasting the â€˜weavabilityâ€™ of material made from their yarns.

The first evenness tester was based on a radio field, with a sender and a receiver. The yarn was passed through this field, and any defect would cause a disturbance in transmission. This enabled thick and thin places in yarns to be measured by an electronic signal and illustrated by a line showing deflections.

This ability to visualise yarn evenness was a big success, but the next step was even more important: to describe yarn evenness objectively in figures. For this, Zellweger applied the principles of the planimeter, used by architects to calculate floorplan dimensions, to work out the space between deflection lines. This was the foundation for the original USTER STANDARDS, published in 1957.

Hans Locher collected a large number of textile samples, from Switzerland and from abroad. Along with HÃ¤ttenschwiler and a lab assistant, he measured these in the textile laboratory and developed quality standards. These standards have since become recognized by official national and international organisations for standardisation. â€œHans Locher received a doctorate of technical sciences honoraris causa from the ETH Zurich for this work, as well as for other achievements. With these standards it was possible to determine the quality of a textile cross-section on a global scale for the first time,â€ recalls HÃ¤ttenschwiler. The textile industry was impressed when the first of these reference values were published over three pages of the Melliand textile magazine 60 years ago, and soon began to ask for more like silk and bast fibres. The extended standards were given the name USTER STATISTICS.

Over the years, the demand for yarn reference values increased with every new kind of yarn being developed, with the growth of man-made fibre types such as polyamid and viscose becoming very popular. Zellweger Uster continued to collect yarn quality values worldwide and the mass of data available was continuously increasing. â€œOf course a lot of manpower was needed to elaborate the USTER STATISTICS, but the spinners and also the machine manufacturers appreciated the free reference values,â€ says HÃ¤ttenschwiler.

The sheer volume of data for comparing yarn quality parameters was becoming quite difficult to handle but this also presented a new opportunity. USTER STATISTICS was transformed into a benchmarking tool. This innovation meant that the values were not actually listed but were instead bundled in standard categories of 5 per cent, 25 per cent, 50 per cent, 75 per cent and 95 per cent. These were known as the USTERÂ® STATISTICS Percentile figures, used to rate a particular parameter based on comparisons of quality levels for each yarn type and blend being produced by mills globally.

The USTER STATISTICS are an undoubtedly a wonderful â€˜inventionâ€™ â€“ even though they were not actually invented as such. In fact they evolved as vital benchmark values out of an urgent need by the industry to compare yarn quality. That process of evolution in response to industry requirements might well be the secret of their success during the past six decades.

â€œWe were proud of the Statistics because it was genius as well as helpful at that time. Thatâ€™s all. We were much too modest to believe that what we made could have a big impact on the companyâ€™s reputation as a technological leader,â€ says HÃ¤ttenschwiler.

The Uster Group is the leading high-technology instrument manufacturer of products for quality measurement and certification for the textile industry. The Group provides testing and monitoring instruments, systems and services that allow optimization of quality through each individual stage of textile production. This includes raw textile fibres, such as cotton or wool, all staple fibre and filament yarns, as well as downstream services to the final finished fabric. The Uster Group provides benchmarks that are a basis for the trading of textile products at assured levels of quality across global markets. The Groupâ€™s aim is to forward know-how on quality, productivity and cost to the textile industry.

The Group is headquartered in Uster, Switzerland and operates through a worldwide Market Organization complemented by Technology Centers.