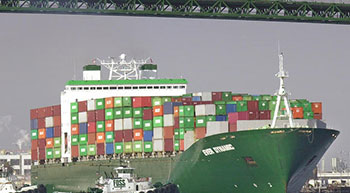 Cargo traffic at major ports up 5.3%

adminOctober 25, 2016 12:00 am 0
Cargo traffic at Indiaâ€™s 12 major ports recorded a growth of 5.3 per cent to 315.4 million tonnes (MT) in the first six months of 2016-17. â€œThe major ports in India handled 315.4 MT of cargo during the first six months of FY 2016-17 (April-Sept). The cargo traffic handled by the major ports during the same period last year was 299.5 MT,â€ the Ministry of Shipping, says. This is the result of many measures initiated by the Ministry to improve the performance of ports, it adds. â€œThese include mechanisation of the terminals, improving the TAT (turn-around time), quick evacuation of cargo, expansion of infrastructure and skill development of employees. â€œThe slew of measures taken by the Ministry of Shipping to improve performance of ports has started to yield positive results,â€ the statement says.
Regarding commodity wise growth of cargo, the April-September period witnessed an astounding growth of 142.4 per cent in iron ore handling as compared to the same period last year. â€œThis growth in cargo share of iron ore can be attributed to re-starting of iron ore mining in the state of Goa. POL (petroleum, oil and lubricants) increased by 5.8 per cent followed by other cargo at 4.6 per cent and container at 0.7 per cent as compared to the same period in 2015-16,â€ it says. In terms of composition of cargo, the largest commodity handled in the period was POL (37.1 per cent), followed by coal (23.4 per cent), container traffic (19.6 per cent), other cargo (11.9 per cent), iron ore (5.66 per cent) and fertilizer and FRM (2.5 per cent).
CATEGORIES Industry Update
TAGS Cargo trafficlogisticsshippingskill developmenttextile newstransportation
Share This