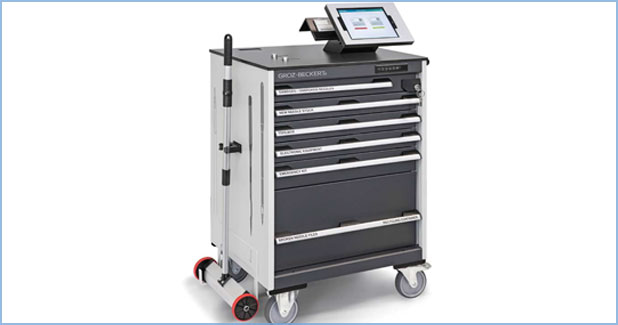 On June 23, 2018, the new production facility of Bruckner, the world market leader in dry finishing machines for textiles and technical textiles, was officially opened in Tittmoning, Bavaria.

On June 23, 2018, the new production facility of Bruckner, the world market leader in dry finishing machines for textiles and technical textiles, was officially opened in Tittmoning, Bavaria. Representatives from politics, the church, banks and industry were present when Regina Bruckner inaugurated the new, generously dimensioned production plant together with Dr Peter Ramsauer, former Minister of Transport and approximately 800 other guests.

â€œOur old factory simply became too small. Increased incoming orders and ever-increasing demands on machine sizes and delivery dates were the reason for planning a new plant in 2014. We were not able to start construction until November 2016, as many hurdles in the approval process and with regard to nature conservation had to be overcome in advance. With the new plant with 25,000 mÂ² of production space and a spacious office wing, we will continue to meet the high expectations of our customers in the future.

The possibility of producing components with a height of up to 12 m and a working width of up to 8.80 m offers us great potential for the future. Our employees are also pleased about the new, more spacious workplaces, more effective logistics and more powerful lifting gear. With a large number of new, highly automated processing machines, we are in a position to manufacture and supply even larger machines as before, and we will also be able to increase our delivery volume and significantly shorten delivery times,â€ emphasised Regina Bruckner in her address.

In her speech, she explained the many advantages of the new plant and presented details of the highly automated and efficiently organised production: the new modern CNC machine tools, the additional welding robots and the new highlight of the plant: the highly automated powder coating and wet coating system. She emphasised that the installation and commissioning times can be further reduced thanks to the significantly improved lifting, transport and assembly options. The now ceremonially opened new plant in Tittmoning is another forward-looking step of Bruckner to reposition itself in the world market for the finishing of textiles and technical textiles as a system supplier with great future potential.

The former German Minister Dr Peter Ramsauer emphasised in his speech the importance of the manufacturing industry in Germany and expressed his joy that Bruckner, the leading manufacturer of textile machines, is so clearly committed to the location Germany and does not transfer jobs abroad. He congratulated Bruckner on the successful move to the new plant and emphasised the outstanding importance of such tradition-conscious family companies as Bruckner for the German industry and the location Bavaria in particular. He once again emphasised the considerable investment of 40 million at Brucknerâ€™s long-term production site in Tittmoning and expressed his pleasure that great importance was attached to a sustainable and environmentally-friendly implementation already during the planning phase.

The celebrations were preceded by a Bruckner agency conference in which more than 90 Bruckner representatives worldwide were informed and trained about new technical developments. Representatives from industry, trade, banks and politics as well as invited planners, architects, neighbours and staff members focused on the new plant for a total of four days. Executing companies and local residents as well as many of the numerous employees present will be pleased when â€œcalm has returnedâ€ and Bruckner can concentrate again on the essential: the production of textile machines of the highest quality â€œmade in Germanyâ€.