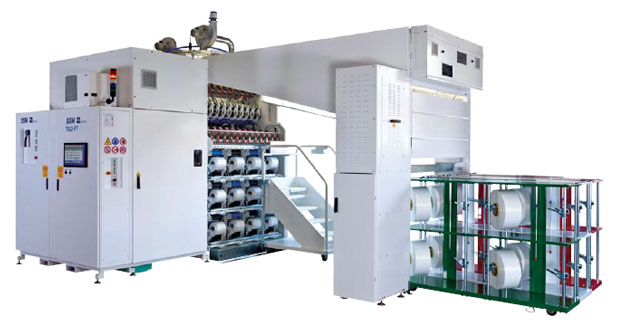 The Swiss-based SSM SchÃ¤rer Schweiter Mettler AG, the inventor of the electronic yarn traverse system, will continue its tradition of trend-setting with the presentation of breakthrough technologies. With the introduction of the new XENO-platform, SSM is demonstrating its lead in the market. Six new product launches in the winding & doubling segments and two in false-twist & air-texturing are to be shown for the first time.

The Swiss-based SSM SchÃ¤rer Schweiter Mettler AG, the inventor of the electronic yarn traverse system, will continue its tradition of trend-setting with the presentation of breakthrough technologies. With the introduction of the new XENO-platform, SSM is demonstrating its lead in the market. Six new product launches in the winding & doubling segments and two in false-twist & air-texturing are to be shown for the first time.

A Machines for the following applications will be on display:

The new SSM modular winding machine platform XENO combines dye package winding, rewinding and doubling applications with three different winding technologies. The XENO is available with counter rotating blades (XENO-BW), with friction drive system (XENO-FW) and with high quality SSM yarn guide system (XENO-YW). With the new platform, SSM is able to offer the three winding technologies for assembly winding as well (XENO-BD, XENO-FD and XENO-YD). Complying to the growing automation demand (due to increasing labor costs) all the XENO machines could be equipped with an automatic doffer system. Another advantage and benefit of the XENO platforms is the enhanced DIGICONEÂ® 2 winding algorithm, enabling a 10-20 per cent increase on dye package density with same dyeing recipe.

The unique characteristics of tailormade high performance yarns is helping such yarns to substitute other classical materials in large range of applications; thereby continually increasing the usage of technical textiles and consequently their consumption. The SSM DURO-TW precision winder for all technical yarns up to 50,000 dtex offers a new level of flexibility and winding quality in one machine; thereby ensuring the fulfilment of all customer requirements. The assembly winder DURO-TD allows the plying of multiple ends/yarns; independently of them being of the same type or completely different. Optional intermingling guarantees loop-free twists as well as optimal unwinding during twisting. The ability to run closed precision winding enables higher package densities, thereby increasing the knot-free length.

From SSM GIUDICI, the brand new TG2 machines will be shown. The TG2 platform is the next step of the well introduced TG1. It comes with an individual, frontal doffing system to allow double-sided concept of the machine (one full package and one empty tube in the cradle whilst a package is being processed).

The SSM GIUDICI TG2-FT false-twist texturing machine combines a proven texturing path along with a spacing saving machine design. The result is a machine for the cost-efficient production of high quality Polyamide (down to 7 dtex), Polypropylene as well as fine count Polyester yarns.

In combination with the TG2-FT the TG2-AT will be shown as well.

The SSM GIUDICI TG2-AT air texturing machine is designed for the cost-efficient production of high quality air texturised yarns made of POY or FDY polyester, polyamide and polypropylene and ranging from fine to medium final counts.

The SSM TK2-20 CT/KTE will be exhibited for sewing thread finish winding. It sets market standards in combining the established performance of the well-known THREAD KING series with the functionality and operational comfort of modern control and drive technology. The TK2-20 stands for first-class unwinding properties and fulfils the highest yarn processing requirements. Besides of the cone winding (CT) the latest technology for Kingspools (KTE) will be shown.

The TK2-20 KTE is a fully automatic Kingspool winder which certainly is the most flexible sewing thread finish winder for bonded filaments in the market.

Last but not least, the SSM GIUDICI NOVA-CS will be shown for the fi