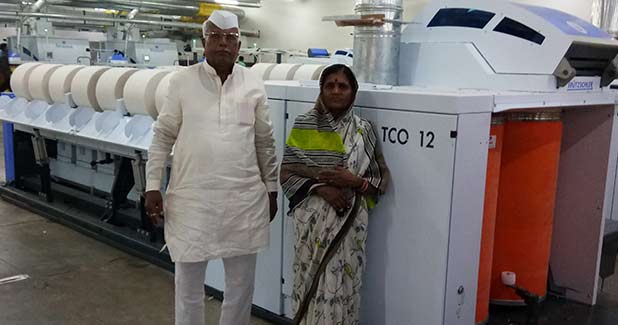 Sangam, in district Solapur, is a small village which is about 320 km south of Mumbai. In the early 80â€™s a young boy saw his mother and father working in the nearby cotton fields.

adminFebruary 27, 2020 12:00 am 0
Sangam, in district Solapur, is a small village which is about 320 km south of Mumbai. In the early 80â€™s a young boy saw his mother and father working in the nearby cotton fields. The thoughts of his parents working day in and day out stayed in his memory. Even when he completed his school education in the local government school, the memories didnâ€™t fade. As he grew up, he decided to create his future in the cotton sector but didnâ€™t know the background nor did he have any technical knowledge.

The young man started a small business of pumps agency, but the cotton fields always remained in his mind. By sheer hard work and backing of his father, the young man decided to set up his own mill. During that time [luckily], he met Prof Chandrakant Patil who later became his mentor and guide. Prof Patil meticulously taught him the basics of textiles and took him to visit many mills in India.

During the planning phase, Sanjay Tate-Deshmukh found out that the existing mills having Truetzschler preparatory and KTTM ring-frames had better yarn quality record than the mills having all the machines from a single manufacturer. Even the earlier experience of his father and now the Director of Dhanasmruti Mills, Naryanrao Tate-Deshmukh echoed the same thoughts. Along with Prof Patil, he also found out that almost all major spinning mills in India, who had their own retail labels, had Truetzschler machines in their mills. After these findings it was but natural to have the latest Truetzschler machines in their mills.

Sanjay is ably assisted by Vijay Tate-Deshmukh, Director and Vishal Magar, Director, in their sales and marketing strategies. In the near future they plan to have a 40 per cent export component.

Balasaheb Koratkar, Deputy General Manager, who is responsible for the day-to-day production and maintenance, is all praises for all Truetzschler machines. He is happy that in a very less time they were able to attain 5 per cent Uster yarn quality norms with minimum noil levels. As a result, Dhanasmruti Mills has started to carve a name as a quality yarn supplier in India. He also said â€œEven though its early days we are happy about the fact Truetzschler machines are very easy to maintain and are running smoothly since their commissioning. Especially the TCO 12 combers which I feel are better than the combers of other leading suppliers.â€

Sanjay Tate-Deshmukh said â€œMy mother had a dream that one day we, the sons of the farmers, would create big names for ourselves in the cotton industry. Keeping this in mind we have a vision to be the best quality fabric provider to the world by the year 2023.â€

Sanjayâ€™s mother, Shamal Tate-Deshmukh exclaimed, â€œIf these (Truetzschler) machines are responsible for my sonâ€™s success, then definitely they must be good.â€

Narayan Tate-Deshmukh also praised the important role played by the sales team of A.T.E. during the projectâ€™s initial and also the implementation phase. He happily informed â€œThey were even available at midnight for discussions and gave expected satisfactory feedback to our queriesâ€

Sanjay Tate-Deshmukh was upbeat in informing that they would proudly repeat Truetzschler machines in the next 25,000 spindle project. As Shamalâ€™s dream has come true, itâ€™s safe to say Its True Its Truetzschler!