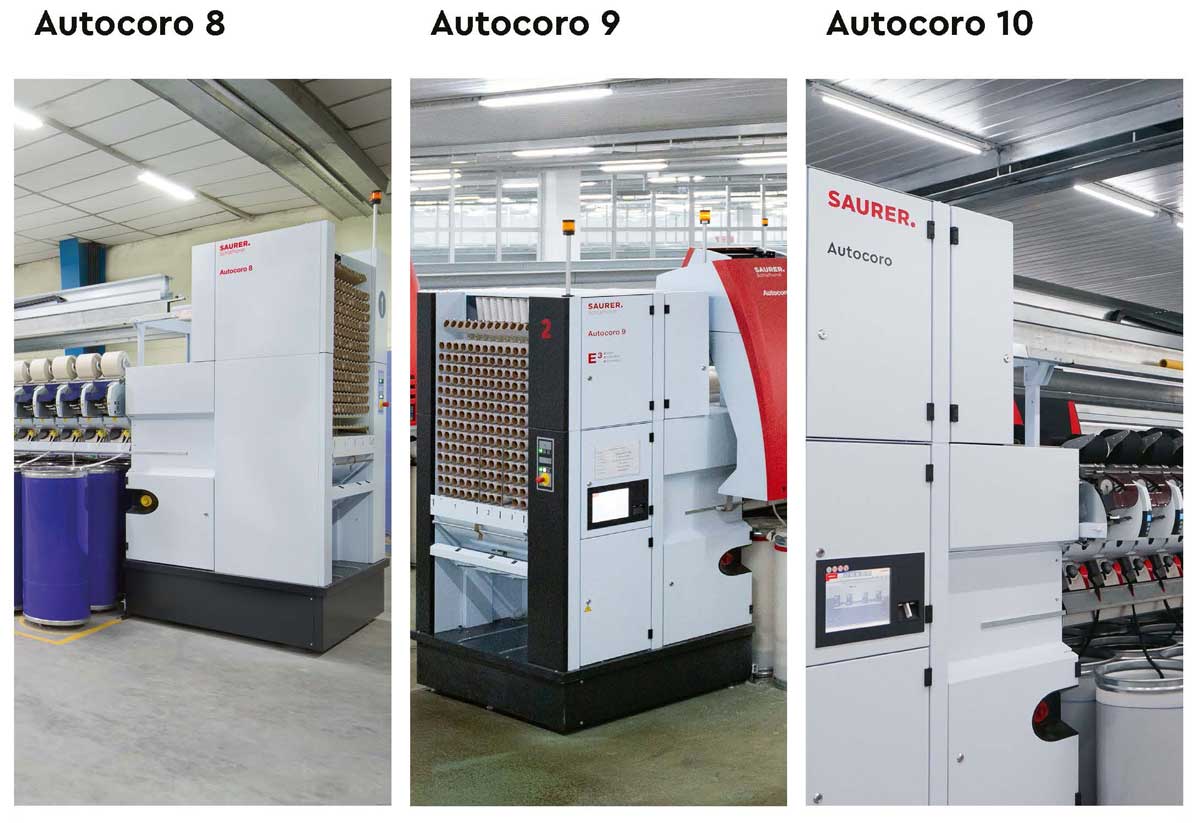 The right solution for every spinning mill configuration

What makes the Autocoro from Saurer so popular?

It is the reliable guarantor for more efficiency in rotor spinning, with numerous performance features that have shown worldwide how automatic rotor-spinning works best today, for every layout of a spinning mill. Just turn it on and produce. The Autocoro is more productive and flexible.It produces a tailored yarn quality and the better packages. This machine is perfectly suited to processing sustainable raw materials, no matter if they are from pre-consumer or post-consumer waste. One of the Autocoro’s key functions in this regard is Synchropiecing, the complete integration of the piecing process in the spinning position.The first generation, the Autocoro 8, completed up to 12 piecings simultaneously, digitally controlled and perfectly networked in the machine.Compared to the traveling units, this was a threefold increase in capacity.With the new Autocoro 10, 36 simultaneous piecings can take place, which ensures that the machines start up three times faster. Thiscontributes to an increase in productivity of up to 30%.

Many performance features that that set apart the first-generation Autocoro 8 10 years ago are still unique today and are only available for the Autocoro. This includes, for example, seamless lot changes during ongoing production. The additional production volume resulting from this digitally controlled lot change management is approximately 113 tons at medium count, two weekly lot changes with 768 spinning positions per machine and year.

Satisfied yarn customers thanks to the flexible Autocoro

The Multilot processing can be distributed flexibly on the machine so that large and small lots are spun in parallel. And if the lot size has to be changed spontaneously, this can also be done during production by changing the spinning positions. So that the lots also meet the increasing demands in terms of transparent sustainability, the Autocoro shows the energy requirement for each lot, for each kilogram of yarn. Another sustainability aspect is the already lower energy requirement of approximately25% when spinning compared to the technologies that were common in the past. The value added of the Autocoro is also increased by the pilot spinning positions, which the spinning mills can use to produce test packages with different settings at the same time as ongoing production and to precisely match their yarns to the needs of yarn customers. Or Digiwinding, the winding technology for a perfect distribution of the yarn layers on the package, which ensures that the package runs off without stopping during knitting and weaving and also significantly saves transport costs. A spinning mill with 10 machines, each with 600 spinning positions that spin a medium yarn count, can thus reduce the number of containers required by up to 10%; thanks to Digiwinding, around 120 fewer 40-foot containers will be required.

The economic spinning of spinning mill waste has been a domain of the Autocoro for more than 40 years. In the past few decades, spinning mills still favoured the sole admixture of waste from the various process stages of the spinning mill, for example card waste and noils. Only 10 years ago, the Autocoro 8 opened the door to an economical spinning of sustainable fibres, processed from pre- and post-consumer waste. If you want to spin these fibres economically in increasing proportions of the mixture, up to 100%, there is still no way around the Autocoro from Saurer.

With the third generation, the Autocoro 10, yarn manufacturers can focus even more strongly on sustainable fibres. An example of this is the Intelligent Guidance System with large-format, highly visible and coloured LED signals above all spinning positions. The LED strips use colours to show the staff which task is pending at which spinning position, e.g. changing the sliver cans when the white LEDs light up. The LED signals save the operating personnel a lot of walking and increase the efficiency of the Autocoro without using additional electronic devices such as smartphones or tablets. As yarns made out of regenerated fibres tend to be coarser, this results result in short sliver can running times, and empty cans have to be exchanged for full cans more frequently. Customers producing this yarn spectrum particularly benefit from the new lighting concept.

The Autocoro 10 also includes other innovations that increase profits when processing regenerated fibres. These include a 25% higher package changing capacity and additional automatic machine cleaning with the Vacuum Trash Cleaner. Another feature are the new spinning components such as interchangeable fibre beard supports with different designs in the spin box. These control the cleaning of the fibres and thus get the maximum quality out of yarns made from regenerated fibres.

One million Autocoro spinning positions offer huge potential for more sustainability in the textile industry. Numerous performance features of the latest Autocoro 10 generation can also be retrofitted in the Autocoro 8 and 9, which means that machines that have been in production for several years can always remain state-of-the-art.