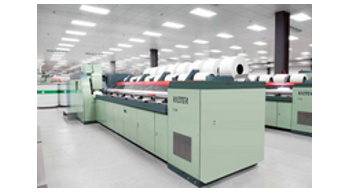 The Rieter Group achieved an order intake of CHF 905.2 million in the 2016 financial year, which represents an increase of 13 per cent compared to the previous year (CHF +103.6 million).

The development in order intake was heavily influenced by the Business Group Machines & Systems. The business groups Components and After Sales increased their sales compared to the previous year. At the lngolstadt site, Rieter intends to focus in the future on the development of machines and the provision of technical support for the after-sales business. The full annual financial statements and the Annual Report will be published by Rieter on March 14, 2017.
The market environment in financial year 2016 was characterised by strong demand in the first half year (CHF 510.7 million) and by mixed dynamics in the individual countries and product categories in the second half year (CHF 394.5 million). The lower demand in the second half of the year, especially in the Business Group Machines & Systems, was attributable to increasing political uncertainties in the main markets of Turkey and India. Thanks to the strong global presence and the broad and technologically advanced product range, Rieter achieved orders amounting to CHF 905.2 million in the full financial year 2016.