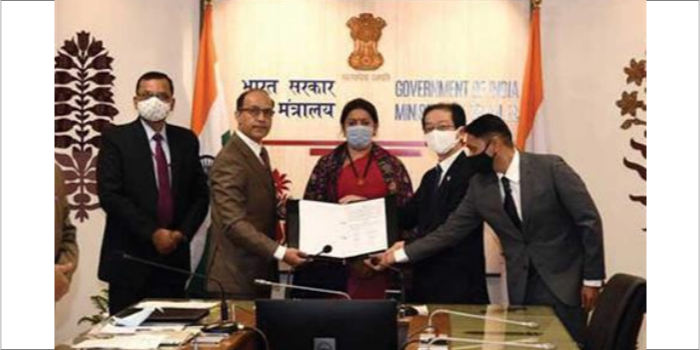 The Union Cabinet chaired by Prime Minister in its meeting held on 2nd September, 2020 had given the approval for signing of a Memorandum of Understanding (MoU) between the two organisations. The signing ceremony was Presided over by Minister of Textiles and Minister of Women and Child Development , Smriti Zubin Irani on the Indian side and by His Excellency Yasumasa Nagasaka, State Minister of Economy, Trade and Industry, Government of Japan from the Japanese side.

The main objective of the MoU is to  provide required support to textileâ€™s trade and industry for ensuring quality as per the requirement of Japanese buyers  through Testing, Inspection & Conformity Assessment, Training & Capacity Building, Research & Development (R&D) and Consultancy.  It is expected that the MoU will strengthen the bilateral trade by enhancing Indiaâ€™s export of Textile and Apparels (T&A) to Japan, which is the third largest export destination of the world.

This MoU will formalise mutual interaction and strengthen the relationship in accordance with their respective areas of specialisation.  Both the institutions have agreed to share and exchange relevant technical information and documentation on a regular basis and carry out activities relating to standards, quality assurance norms, joint research projects on testing, development of user friendly tools for dissemination of data to the industry and facilitate sourcing across the Textiles Value Chain (TVC) from both the countries.

Speaking on the occasion of the signing ceremony, Irani fondly recalled the friendship and long history rooted in spiritual affinity and strong cultural and civilizational ties between India and Japan. She also extolled about the further deepening and strengthening of the India-Japan relationship under the able leadership of Prime Minister Narendra Modi. The Minister further highlighted the challenge relating to stringent quality standards for exports to Japan and expressed confidence that the MoU will help in creating awareness on the various quality parameters being sought by the importers based in Japan and extending hand-holding support to the Indian exporters to adopt and upgrade their technology so as to enhance the quality of products and satisfy the stipulations as required by the Japanese importers.

She also spoke about the synergy in the working of the two organisations and expressed confidence that it will inter alia boost the Technical Textiles sector as well and improve sourcing from India. She also urged the T & A industry to make full use of the opportunity in furthering Indian Interests.

Speaking on the occasion, Yasumasa Nagasaka highlighted that India is a huge market for Japanese industry and expressed confidence that going forward, there will be substantial development in the India- Japan trade relationship.

India and Japan have signed a Comprehensive Economic Partnership Agreement (CEPA) in 2011 which inter-alia facilitates import of garments from India to Japan at zero duty. Despite CEPA, the growth in trade in Textiles and Apparel (T&A) between the two countries has been moderate. Japan is third largest importer of T&A in the world and India is 6th largest exporter and there is huge untapped potential for trade which remains unharnessed.

It is in this backdrop, a high level delegation from Ministry of Textiles was mounted in February, 2019 with a view to enhance exports and co-operation in textile sector and to identify areas for optimizing the benefit of CEPA. As an outcome of these developments, the Textiles Committee entered into negotiation with M/s Nissenken Quality Evaluation Centre, Japan for providing valuable services to the textile trade and industry of both the countries through collaborative efforts between the two organisations.

M/s Nissenken Quality Evaluation Centre is one of the leading Testing and Inspection organisations in Japan established in 1948 and providing world-class facilities and rendering valuable services to the textiles trade and industry in Japan and 7 other countries including China, Indonesia, Myanmar, Vietnam, Bangladesh, Cambodia and India.