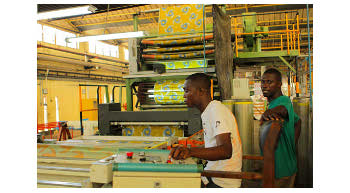 The Ghana textile industry is perhaps the most perfect example of how unbridled imports, piracy and dumping have negatively affected the economy.

adminDecember 23, 2016 12:00 am 0
The Ghana textile industry is perhaps the most perfect example of how unbridled imports, piracy and dumping have negatively affected the economy. The textile industry used to be vibrant in Ghana with over 20 textile firms employing more than 25,000 people, but currently only about four remain, and they are even struggling to survive, with less than 3,000 people in employment. Most of the companies are also unable to operate at full capacity, thereby creating room for massive lay-offs.
The union, which is part of the national organised labour group, the Trades Union Congress (TUC), explains that it had to suspend its monitoring exercise that led to the seizure of some of the pirated textiles due to the 2016 elections. It is, therefore, waiting for the new government to take charge, after which it will resume the fight against piracy.
The union has over the years pushed for the establishment of a task force to rid the market of these pirated textiles but that was not achieved over the years, and that has prompted the need to review the strategy. The task force, comprising representatives of the security agencies, the Ghana Standards Authority, the local manufacturers and the trade unions were able to seize some of these pirated textiles but had to deal with persistent resistance from traders, who sometimes endangered the lives of the group. There have been instances where the traders arrested used their political links to get their pirated goods released to them.
CATEGORIES Industry Update
TAGS Ghana textile industrytextile companytextile firmsTextile Industrytextile news
Share This