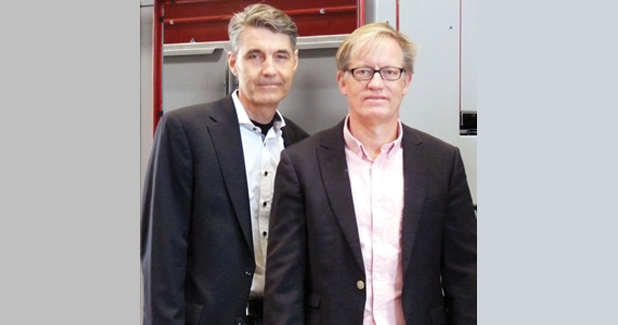 The German manufacturer of iNTERSPARE textile finishing machines is celebrating its 25th anniversary this year. The company was founded in Germany on March 4, 1994 by Carsten Kalek and Dirk Polchow, and over the past quarter of a century it has grown from a two-man startup to a medium-sized family business that operates worldwide.

The German manufacturer of iNTERSPARE textile finishing machines is celebrating its 25th anniversary this year. The company was founded in Germany on March 4, 1994 by Carsten Kalek and Dirk Polchow, and over the past quarter of a century it has grown from a two-man startup to a medium-sized family business that operates worldwide. Both founders are still at the helm of the company today; as its managing partners, they are also celebrating 25 years of service.

Managing Director Dirk Polchow is looking forward to the anniversary year and is more than satisfied with what has been achieved so far. In his own words, he sums up the past quarter of a century as follows: â€œIn this day and age, 25 years is little short of an eternity. Iâ€™m certainly impressed at what weâ€™ve achieved with iNTERSPARE during this time. Weâ€™ve invested a lot of effort, good ideas and enthusiasm in our work, which has resulted in Hanseatic quality and reliability. Thatâ€™s something weâ€™re very happy about!â€

Growth in all areas

In recent years in particular, the transition from global supplier of original spare parts to machine manufacturer has led to strong growth in all areas of the business. In 2016, the business premises in Reinbek were extended, and the following year a new stateof- the-art assembly hall measuring 2,000 m2 was built for the manufacture and assembly of Artos and Krantz finishing machines.

Thanks to this multi-million Euro investment, iNTERSPARE has succeeded in establishing itself on the world market as a textile machine manufacturer for finishing machines and can now look back on a very successful business year 2018. The demand for technically superior machines has increased tremendously, and numerous new machines have been produced and delivered. Customers value the quality of the â€œMade in Germanyâ€ machines and, above all, the premium quality of the woven and knitted fabrics produced on them. At the present time, the most important target markets are India and Bangladesh. Last year in particular, the very intensive and constructive cooperation with customers in these countries led to a number of improvements and further developments being made to the machines, and the company plans to continue this cooperation in the future. iNTERSPARE will be exhibiting the resulting innovations for the first time at the ITMA 2019 in Barcelona.

The growth of the business is also reflected in the size of the workforce. What began as a two-man startup now has over 70 employees working in administration and manufacture. In the last 5 years alone, twenty new jobs have been created and staff capacity requirements have not yet been fully met. iNTERSPARE is currently seeking to recruit additional employees for various departments, including an international sales manager. The plan is to expand the sales and production teams in general.

Thanks to the healthy order book and continuing high demand, iNTERSPARE has been able to further increase and optimise production in 2018. Numerous internal processes have been enhanced, automated and standardised. This has generated direct benefits for customers, such as higher production capacity and shorter delivery times, which means iNTERSPARE can now handle a larger volume of orders.

Polchow comments: â€œOurs is a healthy family business striving to achieve sound long-term growth. Weâ€™re focusing on our target markets and intensifying cooperation with our much-valued customers. Over the last few years, weâ€™ve made excellent progress and our sights are firmly set on the future. Our machines stand for exceptional quality in terms of both design and manufacture. This presents numerous advantages and significant potential for our customers and ourselves. We intend to exploit this potential together.â€

The positive trend is also reflected in the spare parts business. iNTERSPARE stocks over 1,00,000 parts in a modern logistics centre, ensuring that customers all over the world have ready access to components and are able to keep their existing machines running. First and foremost, these include several thousand machines produced by Artos, Babcok and Krantz as well as machines from other manufacturers.

iNTERSPARE has set itself some ambitious goals for its anniversary year. Manufacture and assembly are to be further expanded and optimised in order to better satisfy the ever-increasing demand for new textile machines. The company also intends to present its latest developments at the forthcoming ITMA, the most important trade fair in the industry.

Polchow comments: â€œWe are of course pleased that our business anniversary is in the same year as the ITMA; as that makes it all the more special. But every ITMA year involves a lot of work. Weâ€™ve set ourselves some very ambitious goals for the trade fair. And the Techtextil is another important event.â€

iNTERSPARE primarily sees the Techtextil in Frankfurt as a further opportunity to provide information about its machinery range and encourage lively dialogue within the industry. In addition, the company wants to present itself as an attractive mechanical engineering employer based in the vicinity of Hamburg.

iNTERSPARE GmbH was founded in 1994 in Hamburg by Carsten Kalek and Dirk Polchow. The gentlemen lead the company as managing partners. In the first years iNTERSPARE very successfully provides spare parts for textile machines, especially for textile finishing machines. Since taking over the machine program with all rights, patents, licenses and technical documentation as well as senior employees and know-how from Moenus Textilmaschinen GmbH in 2007 and the building of the new production hall in 2011 iNTERSPARE is a well reputed textile machine manufacturer and the legitimate successor of Artos respectively Babcock Textilmaschinen (BTM), Famatex, Krantz, Stentex, Hacoba and MÃ¼ller.