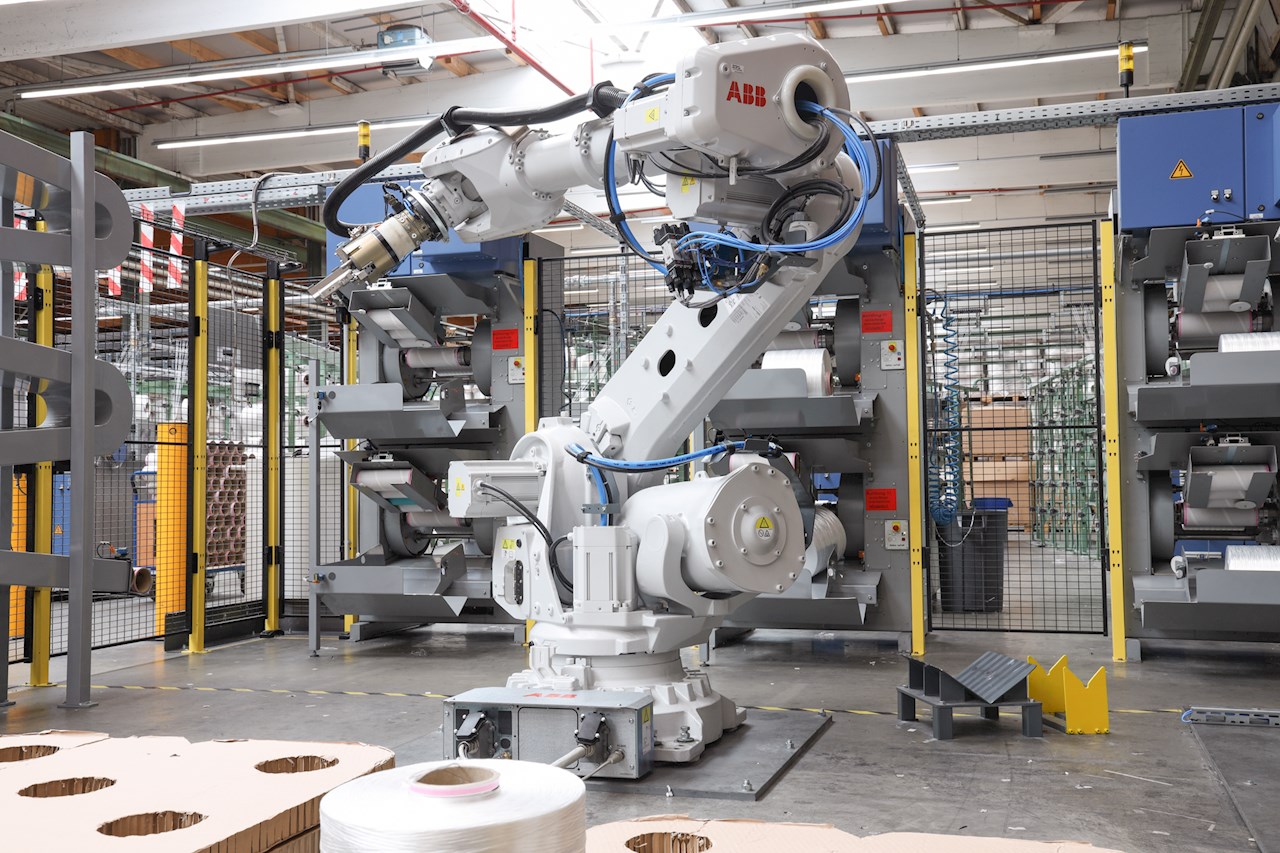 HUESKER, the manufacturer of geotextiles and technical textiles, banks on ABB robot to take pressure off employees by handling and palletize heavy twine reels, providing relief for employees in twine production.

The trend for automation using robotics is unstoppable. Sectors which still demonstrate a low degree of automation, as well as producers of niche products, have long since discovered the advantages of robotics for themselves.

One example is German company HUESKER, a producer of technical textile products. The company has been using a high-performance ABB robot to take pressure off employees by handling and palletize heavy twine reels, providing tons of relief for employees in twine production.

The success of HUESKER spans over 160 years, with the former cotton processing textile company developing into a globally active specialist in technical solutions using synthetic special textiles. The long-established German company – a newcomer to robotics – manufactures high-performance technical textiles for civil engineering, agriculture, manufacturing and lightweight construction. Its geotextile products developed and produced at its headquarters in Gescher, Westphalia, can be found all over the world, forming parts of roads and pavements, as well as in many other places. In addition to geotextiles, the company also offers geogrids, geocomposites as well as entire system solutions that often replace conventional construction methods, offering greater efficiency, durability, and sustainability thanks to reduced CO2 emissions.

One of the company’s production plants, which produces base twine made in part from 100% recycled materials, now relies on the support of a robot. Here HUESKER has been venturing into unfamiliar ground. “Recently, we have been giving a lot of thought to how to apply robotics and automation in the best possible way for us and our personnel. When it comes to handling and palletizing twine reels, which can weigh up to 17 kilograms, the advantages are clear – robots relieve our employees of this strenuous job and give them the opportunity to take on higher-grade tasks,” said Dr Hans Grandin, CEO of HUESKER Group.

The first automation project at HUESKER used the ABB IRB 6700, the most efficient robot with the lowest total operating costs in its class. The robot reliably picks finished twine reels from three production machines, which are each fitted with two removal troughs. With the troughs situated at varying heights, it can be difficult for employees to retrieve the reels from the machines. Also, depending on the production order, the twine reels can differ in diameter and weight. This is not a problem for the IRB 6700, which can handle payloads up to 150 kilograms. On average, the robot takes about 2.5 tons per day off the shoulders of the employees.

As well as heavy lifting, the robot also does a good job with more delicate tasks. Each finished manufactured reel of twine has an open thread end which needs to be secured to prevent unwinding on the pallet. The robot passes the reel to a machining station where an adhesive label is applied to fasten the thread. Another issue is that the automatic reel swap leaves the so-called ‘twine reserve’ protruding, which is not needed in the next processing steps. To remove this, the robot moves the reel to yet another device where the thread is burned off with a heating wire and discarded.

The next step is palletization. The robot starts by placing the reels upright on a pallet. As soon as a level is fully packed, it takes an intermediate layer from a hopper and fits it on top of the first layer. The IRB 6700 also takes empty cores from a large dispenser and passes them on to the spooling stations to help keep production flowing.

The IRB 6700 performs these tasks tirelessly over three shifts, standing in the middle of a circular cell, surrounded by the different stations. Here, its reach of 3.2 meters is especially advantageous. Employees simply need to monitor the robot and assist occasionally, such as when a ready pallet needs to be transported away, intermediate layers need to be restocked or empty cores need to be refilled. None of these tasks take long and occur only once or twice during a shift. Apart from these short interruptions, the entire system runs nearly autonomously.

By using ABB’s safety-certified SafeMove software, the robotic cell could be integrated compactly within the available space. The robot immediately stops whenever a person enters the cell.

For quick commissioning, HUESKER used the ABB RobotStudio simulation and offline programming software. This allowed the company to simulate the robot’s movements in advance and look at ways to optimise its operation even before it was commissioned.

“We have turned this automation system into a prototype, which we can now mirror in other systems on a nearly one-to-one basis. We are using the lessons learned to build further knowledge for robotics in this special field of application. This is because handling thread in synthetic materials is a very complex requirement, for which there are no off-the-shelf systems available,” said Heinz-Georg Richels, Technical Manager and Authorized Representative at HUESKER.

As a first-time robotics user, the company is seeking to implement most of the robot cells independently to ensure knowledge is transferred internally from the start. The company got a head start from ABB thanks to support and consultation during the configuration of the robotics application, as well as through in-depth training. The comprehensive ABB service network is also available to HUESKER – a key factor which also tipped the scales in the decision to use ABB technology. “Even if we are implementing and trying out many things on our own, the fact that we have a partner in ABB at our side, who can quickly and professionally support us when needed, is very important to us,” said Tobias Efsing, Automation Manager at HUESKER.

A blueprint for future projects

After the successful implementation of its first automation system, HUESKER sees plenty of potential for the use of robotics in additional applications, such as for processes upstream of actual twine production. In this manner, continuous automation lines will be created which will help the company boost productivity and flexibility, as well as further enhance working conditions for employees.

“We are a highly specialised operation, so accordingly any new robot cells we build will be prototypes. To this end, we need personnel that are well educated and want to further deepen their knowledge. The fact that we are already using robotics now helps us win over young professionals who are on the lookout for attractive jobs, and then keep them in the long-term. And of course, we continue to place our trust here on strong partners like ABB,” concluded Dr Grandin.

The HUESKER Group is one of the leading global manufacturers of geotextiles and technical textiles with headquarters in Gescher (Westphalia), Germany. The company is a global player, with more than 500 employees worldwide and ten subsidiaries as well trading and sales partners in over 60 countries. As such, HUESKER has been shaping international markets as a pioneer in textile weaving for the past 160 years. The HUESKER Group replaces conventional massive construction with sustainable and intelligent solutions from the realm of modern and efficient technical textiles and composites. Top-class engineering services, a high level of competence in surface preparation, coating, as well as the production of technical textiles and innovative power are key to the success of HUESKER.