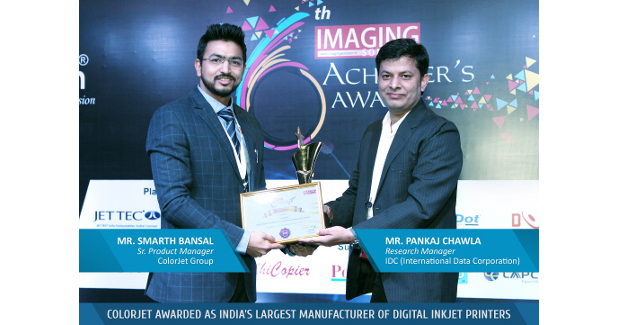 ColorJet India Ltd has been acknowledged as â€˜Indiaâ€™s Largest Manufacturer of Wide Format Digital Printerâ€™ at the annual 6th Imaging Solution Awards Night held in New Delhi on January 13, 2017, for which it won an award, instituted by Imaging Solution magazine.

adminFebruary 17, 2017 12:00 am 0
Indiaâ€™s biggest digital inkjet printer manufacturer ColorJet India Ltd, a division of ColorJet Group, has been acknowledged as â€˜Indiaâ€™s Largest Manufacturer of Wide Format Digital Printerâ€™ at the annual 6th Imaging Solution Awards Night held in New Delhi on January 13, 2017, for which it won an award, instituted by Imaging Solution magazine.
The event at which over 45 awards were given away in various imaging industry categories was attended by over 400 top imaging industry professionals who included manufacturers, importers, exporters, distributors, resellers, etc from different parts of India and also from China.
ColorJet India now offers the latest and several digital printers for various segments like Textile printers, Signage printers, Eco Solvent printers and UV printers. The company also offers a varied range of digital printing inks including Textile inks, Solvent inks, Eco Solvent inks, Dye Sublimation inks and UV Curable inks.
The ColorJet textile digital printer range includes the best selling Metro and Vastrajet textile printers. The Fabjet Duo, Fabjet Grand and Aurajet Series II, make up for the rest of the ColorJet textile digital printers line-up.
ColorJet is globally reputed for its deep commitment to technological innovation, strong outreach, service infrastructure and complete customer focus, and operates two manufacturing facilities of which one is in India and the other in China. This helps the company to offer faster deliveries of digital printer spares to its customers.
ColorJet India markets its products in 14 countries worldwide and has sales offices spread across seven countries. To-date, ColorJet has installed over 4,000 of its printing solutions across 315 cities around the world backed by an over 280 strong member team, of which almost 100 are in technical related functions.
â€œWe feel honoured on winning the award for being named â€˜Indiaâ€™s Largest Manufacturer for Wide Format Digital Printerâ€™. We dedicate this award to the large number of Indian digital printing fabric manufacturers, who reposed faith in ColorJet digital printers, due to whom we bagged the award,â€ Smarth Bansal at Colorjet India said.
â€œAt the same time, winning the award also increases our responsibility towards our current and future customers, as we will need to continue to offer the same â€˜Goldâ€™ standard of after sales service, for which Colorjet is recognised in India and the world,â€ he added.
CATEGORIES Industry Update
TAGS Colorjetdigital printerdigital printingprinting solutionTextile IndustryTextile printing
Share This